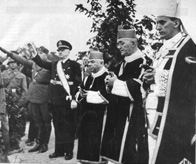 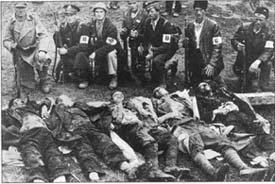 Ustashi soldiers pose with the corpses of five Serbs. By war's end, they would slaughter over 700,000 more!! 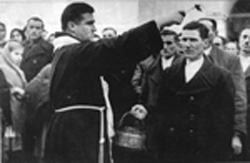 Forced Conversion. The Ustashi promised the Serbs that they would be spared death if they converted from Eastern Orthodoxy to Roman Catholicism. Thousand converted, only to be killed anyway. 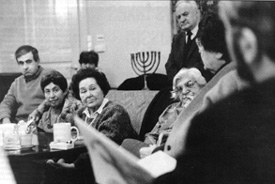 Elderly Holocaust survivors, many of whom lost entire families in concentration camps, listen as Jewish leaders in Zagreb explain the process of filing for restitution from Swiss banks that received Nazi gold. 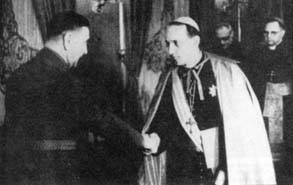 Archbishop Stepinac greets Ante Pavelic on the anniversary of the Independent State of Croatia. 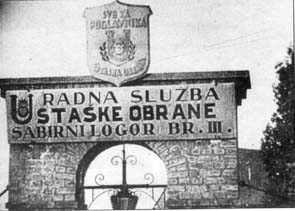 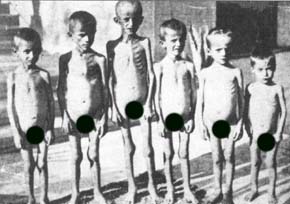 Serb children after their rescue from the Ustashi camp. 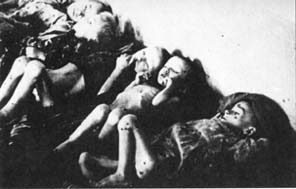 In the camp of Jasenovic and Stara Gradiska about 8000 children died. 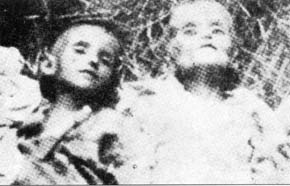 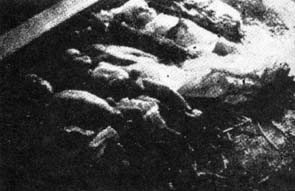 1941: Children in the Stara Gradiska concentration camp dying of slow starvation. The government of the satellite state of Croatia ordered caustic soda to be added to their food in order to eliminate them. 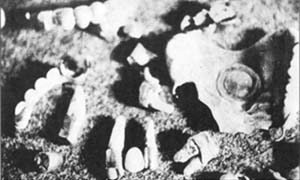 In Jasenovac and other camps, the Ustashi broke the jaws of the victims and removed the gold crowns, took away the medallions, and took the hidden gold from the rich prisoners. The gold ended up in the palace of Archbishop Stepinac and was later shipped to Rome!! 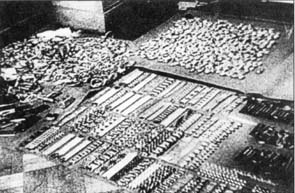 Gold watches taken from Serb and Jewish victims and hidden in the residence of the Archbishop of Zagreb, where they were found after the retreat of the Ustashi. 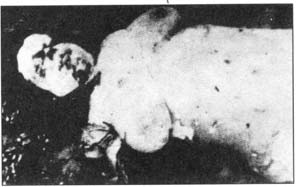 Ante Pavelic had a hobby of collecting human eyes!! One day a visitor came to his headquarters and noticed what looked like a bowl of oysters on the table. "Oysters from Dalmatia" he exclaimed. "No" said Pavelic "this is a bowl of Serb eyes" 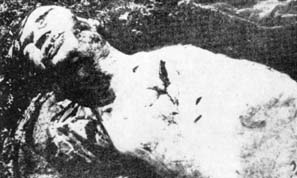 The Serb Milos Teslic, a famous industrialist and philanthropist, was gruesomely tortured and murdered by the Ustashi. 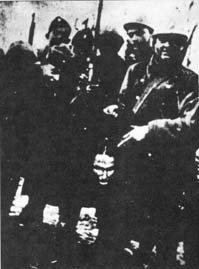 Ustashi carrying the head of a Serbian Orthodox priest. 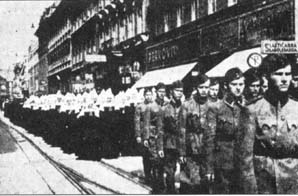 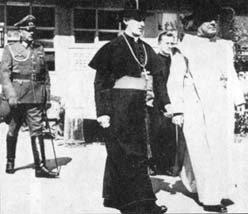 Archbishop Stepinac and the papal nuncio Marcone leave a celebration; behind them is a German General. 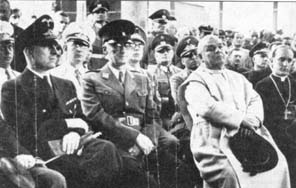 The papal nuncio Marcone (in the white robes of the Dominican order), Archbishop Stepinac next to him, and around them sit leading military representatives of Nazi Germany and the NDH. 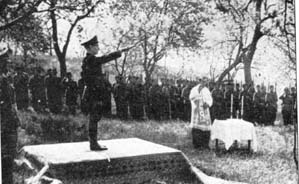 Members of Pavelic's bodyguard swear allegiance unto death to the Croatian leader and receive the "church's" blessing!! 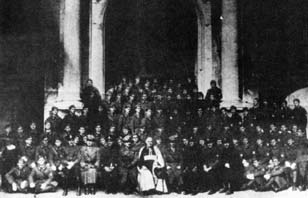 Reception of the Ustashi Police special unit at the Vatican in Sept. 1943.

All in all, Croats and Serbs are of two worlds, northpole and southpole, never will they be able to get together unless by a miracle of God. The schism (Eastern Orthodoxy) is the greatest curse in Europe, almost greater than Protestantism. Here there is no moral, no principles, no truth, no justice, no honesty.

Poison gas was also used as a method of extermination. You can always tell that the Vatican is involved by their use of poison. Dr. Alberto Rivera said that as a Jesuit priest he had to show proficiency in all types of poison.

The first experiments with poison gas were carried out in the veterinary chamber in the work room of the so-called "Economy," where mangy horses were healed. The horses were handled in such a way that the rump was in the chamber and only the head protruded. For the treatment, sulfur dioxide was used. They also tried this poison on people, as well as Zyklon. In the first experiments, it was discovered, however, that the victims, because of the permeability of the walls and the crude introduction of the gas, did not die so quickly and so easily and that they also revealed the cite of their torture by their terrible screams. In this chamber, other gases were also tried for killing prisoners, but without success.

The above quote and a few of the less graphic pictures are from the book The Yugoslav Auschwitz and the Vatican by Vladimir Dedijer published by Prometheus Books, Buffalo, New York, ©1988.

The Ustashi took pictures for two reasons: One, they believed Hitler would win the war, and two, they would have evidence to show their bosses that they did a good job of exterminating!!