JESUS IS THE ROCK OF AGES!!

The entire stupendous Papal system is built on ONE verse of Scripture. Remove that ONE pillar and the whole system will collapse. That one verse is found in Matthew chapter 16:18. This is called pyramid building—upside down. Any living thing with two heads is a monster!!

Rome takes ONE verse of Scripture and builds her "church" upon a foundation of sand. Jesus said to Satan:

"Man shall not live by bread alone but by EVERY Word that proceedeth out of the mouth of God." (Luke 4:4).

In other words we look at ALL the verses in the Bible to get the whole TRUTH about any subject.

When Jesus first saw Peter this is what happened:

"He (Andrew) brought him to Jesus and when Jesus beheld him, he said, Thou art Simon the son of Jona: thou shalt be called Cephas, which is by interpretation, A Stone" (St. John 1: 42).

Halfway through the ministry of Jesus, in Matthew 16, Jesus asked his disciples what people were saying about Him: Peter answered that question correctly when he said:

"Thou art the Christ, the Son of the Living God."

Peter's CONFESSION OF FAITH IN CHRIST is the ROCK upon whom the true church is built - not Peter the STONE.

In the very same chapter Jesus turns to Peter and calls him Satan because Peter had tried to turn Jesus away from going to the Cross to die for sinners:

"But he turned and said unto Peter, Get thee behind me, Satan: thou art an offense unto me: for thou savourest not the things that be of God, but those that be of men" (Matt. 16:23). 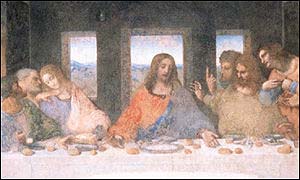 At the last Supper, just before Jesus went to the Cross, the disciples were arguing among themselves as to who should be the greatest (Luke 22:24). If Jesus had made Peter the head, why didn't the other disciples know about it. Some secret. Peter had a BIG mouth. He never told the others about his supremacy? All Peter had to do to end the argument was to remind them that Jesus had made him the head and the leader.

Let us hear from St. Peter himself as he clears up the whole matter:

"Behold I lay in Zion a CHIEF CORNER STONE, elect, precious, and he that believeth on HIM shall not be confounded . . .YE ALSO as lively stones, are built up a spiritual house, an holy priesthood . . ."
(I St. Peter 2: 5-6).

ALL who make a right confession of faith like St. Peter, become living stones in the church built upon

"the foundation of the apostles and prophets Jesus Christ himself, being the CHIEF CORNER STONE"
(Ephesians 2:20).

Not ONE early church father, in their writings, ever even hint that Jesus made Peter the head of the church.....Such silence is deafening. The first person to propose such an outrageous idea was a Bishop of Rome in the 4th century. Over 300 years after Christ.!!!

St. Peter, far from claiming supremacy for himself said that the Emperor was supreme.

"Submit yourself to every ordinance of man for the Lord's sake: whether it be to the king, as supreme
(I St. Peter 2:13).

Around 60 A.D., the Apostle Paul wrote a letter to the church at Rome. He addressed 25 Christians there and never mentions St. Peter. If Peter was bishop there for 25 years why this silence? Paul even  mentions a British lady named Claudia, but not a word about Peter. Truth is that Peter was never at Rome . . . he was the Apostle to the circumcision—the Jews.

Paul also told the Christians there to submit to the lawful government unless they compel you to do something contrary to Scripture. Governments were instituted by God for the welfare of man and EVERY person is under the authority of the government in which they live—just like every driver must obey the traffic laws in his country or  he will soon end up dead. . . .There are no exceptions. No one is ABOVE the government except Jesus Christ the King of kings:

"Let EVERY soul be subject to the higher powers. For there is no power but of God: the powers that be are ordained of God. Whosoever resisteth the power, resisteth the ordinance of God: and they that resist shall receive to themselves DAMNATION. For rulers are not a terror to good works, but to the evil......" (Romans 16:1-2).

Download the entire text of the infallible Word of God and check out the TRUTH for yourself.

Rome even uses that one verse to get rid of the Bible altogether. . . .Since supremacy was given to the Popes what need do we have of the Scriptures? She uses Scripture to get rid of Scripture!! Can any reasoning be more pernicious or dangerous to the eternal welfare of men and women?