Author of: The History of the Standard Oil Co., Life of Lincoln, A Life of Napoleon Bonaparte, Madame Roland: A Biographical Study etc., etc. 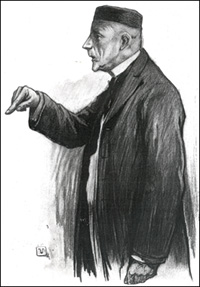 "According as you put something in the greater will be your dividends of salvation."

From an address made to the Euclid Avenue Baptist Sunday school, Cleveland, Ohio, Oct. 11, 1903.

Our American heroine, Ida Tarbell, made many requests to interview Rockefeller but all were refused. Finally some friends in Cleveland arranged for her to attend his Sunday school incognito. That was her first and only glimpse of the tycoon face to face. Her impressions of the real Rockefeller is found in part two.

After the publication of this exposé, McClure's Magazine began to experience financial and other difficulties. Rockefeller moved heaven and earth to keep this information from the American people as he plundered and robbed the nation and the world.... In no other case in history was the Jesuit Oath more completely fulfilled as in the Rockefeller dynasty:

"You have been taught your duty as a spy, to gather all statistics, facts and information in your power from every source; to ingratiate yourself into the confidence of the family circle of Protestants and heretics of every class and character, as well as that of the merchant, the banker, the lawyer, among the schools and universities, in parliaments and legislatures, and the judiciaries and councils of state, and to be all things to all men, for the Pope's sake, whose servants we are unto death."

And the Standard Oil Company did exactly that in EVERY country of the world!!

“Under his silk skull-cap he seems like an old monk of the Inquisition such as one sees in the Spanish picture galleries” (John D. Rockefeller, part 2).

Return to Rome, Rockefeller, the U.S. and Standard Oil